Historic Motor Grader Pictures – Road graders have come a long way since their humble beginning in 1885. Here we trace the history of graders, from the horse-drawn, two-wheeled graders of the late 19th century, to the modern diesel-powered, earth-moving machines produced by Caterpillar, John Deere, and others. The earliest graders consisted of a simple steel frame with a fixed angle blade, and were pulled by horse or oxen. The first documented grader of this kind was invented in 1885 by American entrepreneur, J.D. Adams. Called “Little Wonder”, this grader had two wooden wheels and made use of a leaning wheel principle to counteract the side force produced by the blade. In 1896, the J.D. Adams Company – founded by J.D. Adams – released the first in its Road King series of graders. This road grader had four wheels and an all-steel frame, and was mechanically powered. The Road King proved popular, and the J.D. Adams Company continued to produce graders in the series until the 1930s. In 1919, the Russell Grader Manufacturing Company built the first self-propelled motor grader. This grader – called the Russell Motor Hi-Way Patrol – was created by adding a grader blade attachment to a modified Allis-Chalmers tractor. This design became a prototype for all motor graders produced at the time. In 1928 , the Caterpillar Tractor Company acquired the Russell Grader Manufacturing Company and added motor graders to its equipment line. Caterpillar released the Auto Patrol, the first rubber-tyred, dedicated motor grader, in 1931. This grader – which was renamed No.9 Auto Patrol later that year – became the first in the Caterpillar Auto Patrol motor grader line. In 1937, the Austin-Western Company released the Super 88 – the first all-wheel-steer and all-wheel-drive motor grader. This design went on to become the standard for all future graders produced by Austin-Western. Caterpillar released the Caterpillar Diesel No. 12 Auto Patrol, its first diesel-powered motor grader, in 1938. This long-running model is one of five machines produced by Caterpillar to reach its seventy-fifth anniversary. Caterpillar introduced the No.16 Motor Grader in 1963. This machine was significant because it was the largest grader in the company’s line to date. No. 15 Motor Grader weighed 21,092 kilograms, and had a blade measuring 4.3 metres. A decade later, in 1973, the No.16 Motor Grader was replaced with the 16G, which featured a 4.9 metre blade, hydraulic controls, and an articulating body. In 1967, John Deere introduced the JD570, the first grader with articulated frame steering for improved manoeuvrability. This grader also had front-wheel steering, which, combined with its articulated frame steering, allowed the machine to work more efficiently in confined spaces than any grader previously on the market. In 1975, Champion released the world’s largest grader to date – the 100T – weighing 91,625.66 kilograms. Despite its monstrous size, the 100T still featured all the blade movements of smaller graders, including front wheel lean, 45-degree circle rotation to either left or right, and blade power side shift and tilt. Caterpillar launched its pioneering H series of turbo-charged, all-wheel drive motor graders in 1995. This range included Caterpillar’s largest grader to date, the 59376.15 kilogram 24H. Today, the H Series is still the company’s best-selling line of graders. Caterpillar released its M Series in 2007. This line of graders features a joystick control to reduce the hand and wrist action required to operate the grader. 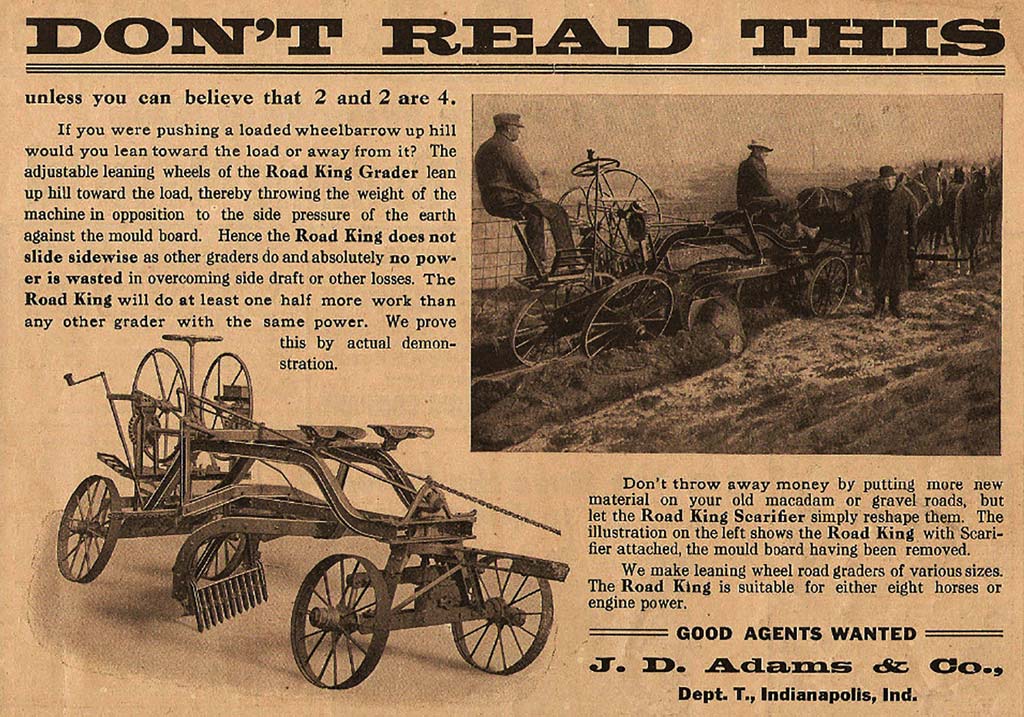